The first stages of labour

The first stage of labour is usually the longest part of the birthing process by far. With your first child, labour is generally longer than your second and subsequent births, with an ‘average’ labour for first-time mothers around 12-14 hours, although anything from 2-20 hours is pretty normal.

The first stage of labour is often described as having three distinct phases:

During labour, your caregiver will keep monitoring your baby’s response, usually by measuring its heart rate. This can be done by regularly checking against your abdomen, using a special instrument called a Pinard stethoscope; or you may wear a belt around your abdomen, linked to an electronic foetal monitor (EFM) that will display the baby’s heart rate and may also record it as a printout. Sometimes an internal monitor – using a small electrode clipped onto the baby’s scalp – will be used and signals transmitted to a radio pickup on the EFM. 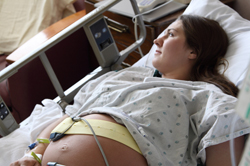 Many women, particularly if they are able to move around through labour, find electronic foetal monitoring through a belt very uncomfortable and restrictive so if caregivers want to have EFM it will often be done just for a short period of time, only 30 minutes or so, unless there are real concerns about the baby’s reaction to labour.

Having your partner and/or a trusted close friend as well as a professional caregiver can help enormously, particularly if they have been well-briefed and have perhaps attended  childbirth preparation classes with you.

The first stages of labour