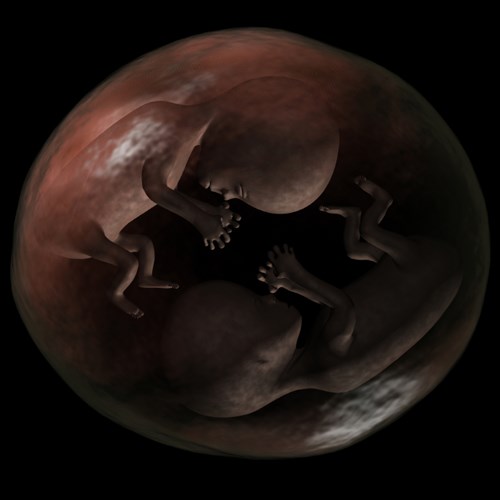 Twins are conceived in a different way to singleton babies. From the very start of conception, twins are formed when one of two important processes occur. Either two eggs are released by a woman’s ovaries and are fertilised by two separate sperm – these are known as non-identical, fraternal or dizygotic twins – or one egg is fertilised by one sperm and this fertilised egg then splits into two identical halves. These are known as identical, non-fraternal or monozygotic twins.

Identical twins share exactly the same genetic structures and are always the same gender, whereas non-identical twins can look very different and be the opposite gender. They share the same similarities and differences as any other siblings who have the same biological parents.

It can be fun to keep a twin pregnancy week by week video diary. Consider writing to your twins each week of their gestation or doing a video log of your progress. This can be a lovely record to look back on.

But how will I know what type of twins I’m having?

It is often not clear in the early weeks of a woman’s pregnancy what type of twins she is carrying. Ultrasounds can determine which varieties of twins are present, but not always. Many women don’t know for sure until their twins are born and their placenta/s and membranes can be examined.

How is a twin pregnancy different?

One of the obvious differences about being pregnant with twins is that you will get a lot bigger than if you are carrying only one baby. Your womb will need to stretch to many times its original size in order to accommodate your two growing babies. But unfortunately, you won’t be able to increase your height or stature to allow for a more comfortable pregnancy.

Although the average length of gestation is classified as 38-42 weeks, it is reasonably uncommon for twin pregnancies to last until 40 weeks or beyond. The sheer lack of space for two babies to grow anymore is often the catalyst for an earlier labour. This is one of the reasons why twins are frequently born prematurely. But there is also an increased risk of maternal complications with a twin or multiple pregnancy, which might increase with each week of gestation.

But I’m so uncomfortable!

When experiencing a twin pregnancy, some changes may be subtle and some more obvious. When carrying twins, it seems that every symptom is multiplied. This is one of the reasons why women pregnant with twins often need to leave their paid employment earlier than those who are pregnant with one baby.

With singleton pregnancies the womb tends to grow at a steady and measured pace. But with twins, for every week that passes, a mother’s abdomen increases exponentially. Her increasing weight will reflect this as well, and those creeping numbers are not due solely to the weight of the twins. Her breasts, increased blood volume, the weight of the placenta and amniotic fluid, and general increase in body fat stores all need to be accommodated.

This is the first 3 months or first 13 weeks of a pregnancy. The first trimester is when the early symptoms of pregnancy can be so exaggerated that they cause many women who have conceived with twins to become suspicious. Extreme nausea is a common experience with twin pregnancies because of the high levels of hCG – Human Chorionic Gonadotrophin hormone. As well as the pregnancy symptoms being more severe, they can also occur much earlier on.

For women who have a history of conceiving with non-identical twins before, or where twins run in their family, they may be even more mindful of the possibility of carrying more than one baby. It is not uncommon for women in their first trimester of twin pregnancy to look pregnant. The enlarging womb lifts and rises out of the pelvis much earlier with two babies than one. This can mean that trying to hide the fact that you’re pregnant or keeping it secret could become a challenge.

Generally, it’s not until around weeks 5-6 that a woman may suspect she is pregnant. But with twins, the symptoms can be so obvious that this motivates a woman to have her pregnancy confirmed earlier. The positive indicator on a home pregnancy test then reacts so quickly that this, again, may provide a little hint that there is more than 1 baby. Especially if the test is done very early after conception or when testing urine passed later in the day.

Generally morning urine has the highest concentration of hCG, which is why it is recommended as an ideal specimen for pregnancy testing.

Twins can usually be seen on ultrasound by week 6 of pregnancy.

Symptoms of twins in the first trimester

The second or middle trimester lasts from weeks 14-27. This is often the most enjoyable of the three trimesters – when pregnancy nausea and fatigue has settled. but the size of the womb is still reasonably comfortable. Mobility is generally reasonable and walking and sitting isn’t yet an issue.

These are the weeks when many women that are pregnant with twins find they have a renewed sense of energy and optimism, and perhaps for the first time an enjoyment of their pregnancy. Many find themselves becoming very excited about the prospect of having twins. The initial shock and disbelief has settled and they have become used to the idea.

This is also the time when a lot of organisation and planning can be done. During the second trimester many women say they become more emotionally attached to their twins. The early, fearful weeks have passed and with them, the higher risks of miscarrying. Many women don’t allow themselves to think about the reality that they are having twins until they have reached the second trimester.

By then, at least one ultrasound is likely to have been done and the babies visualised on the screen. Foetal movements are felt and seen constantly and the need to become organised and think long-term about the impact of having 2 babies forces many couples into a greater acceptance that they will be having twin babies.

The third trimester spans the time between weeks 28-40 of pregnancy. This is the time when it can become very obvious that a woman is pregnant with more than one baby. Her uterine size becomes a giveaway for the number of weeks of gestation she’s progressed to. But like any singleton pregnancy, individual women will “carry” their twin pregnancy differently. Some just seem to have a neat little bulge at the front and others appear to carry their pregnancy from side to side.

But a twin pregnancy tends to really take over a mother’s abdomen and, to compensate, most women need to change their gait to accommodate the changes in their centre of balance.

Foetal movements can be very strong and visible through the wall of the mother’s abdomen. Particularly in the later weeks, the muscular wall of the womb becomes quite thinned and the baby’s limbs can be visualised as they move around. For small, petite women this is more obvious than women that are taller and have a larger frame.

Swelling, fatigue, exhaustion, and a lack of general energy are all common symptoms for mothers in their third trimester of pregnancy. This is why it is so important to take the opportunity to rest whenever possible. 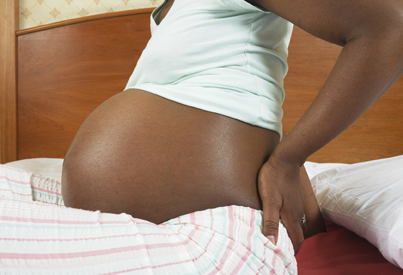