How many weeks pregnant am I? 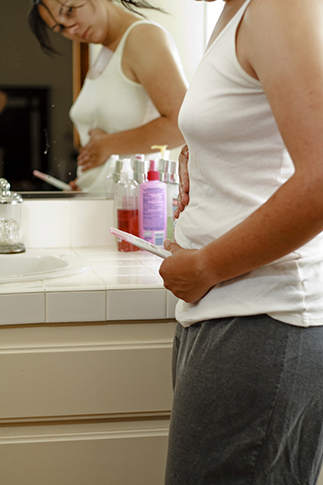 Congratulations, you think (or know) you’re pregnant! But it’s quite confusing when you try to work out how many weeks pregnant you are.

That’s because of the way that doctors and midwives have traditionally calculated the ‘weeks pregnant’ you are, with 40 weeks being your due date.

Doctors and midwives generally discuss pregnancies in weeks, rather than months, so they can more accurately assess the progress and expected milestones of your baby throughout the pregnancy.

The average pregnancy is assumed to be a total of 40 weeks (that’s 280 days) from the first day of your last menstrual period (often shortened to ‘LMP.’)

Pregnancy is commonly referred to in terms of ‘gestational age’ rather than ‘foetal age development.’ When you think about it carefully, that means that the average gestation only goes for 38 weeks after fertilisation – and using this system, you are already two weeks ‘pregnant’ at the time of ovulation!

To work out how many weeks pregnant you are under the traditional system just work forward from the first date of your last menstrual period.

How many weeks pregnant am I – under the foetal age (or ovulation) system?

Sometimes doctors and midwives talk about the ‘foetal age’ or use the ‘ovulation’ system of determining how many weeks pregnant you are, because it is more accurate than just guessing that you might have ovulated about 14 days after the first day of your last period.

The foetal age is the actual age of your baby – that is, how many weeks since the egg and sperm joined together in conception.

Thanks to technologies like ultrasound, as well as widely-available and far more accurate ovulation testing, foetal age can be determined much more easily and give you a better estimate of how many weeks pregnant you are.

If you have a much shorter or much longer menstrual cycle than the standard 28 days, using the standard gestational age ‘dates’ won’t quite match up with where your baby really should be, so foetal age can be more accurate.

Pregnancy is usually divided into three ‘trimesters’ of around twelve weeks each. That’s because these represent three quite different stages of pregnancy in terms of the experiences that the pregnant woman has, and the development of her baby.

How many weeks will your pregnancy last?

The main reason that most women want to know how many weeks pregnant they are, is because they want to know what date their baby will be born.

The traditional method of estimating the due date of a baby, called Naegele’s rule*, is to add seven days to the first day of your last menstrual period, then nine months to the month.

So, if your last period started on 18 November, then your due date is going to be the 24 August, which works out to around 40 weeks. Naegele’s rule assumes the woman has a 28-day menstrual cycle, and ovulated and fell pregnant on day 14 – so gestation is 38 weeks from the day of ovulation.

However, things are not that simple; very few babies actually arrive on their due date, much to the frustration of most expectant parents.

The most common time for babies to arrive is 40 weeks and 3 days; you are statistically far more likely to go overdue than to go early.

Most professionals argue that babies can be born perfectly healthily at anything from 37 to 42 weeks after the date of the last menstrual period.

The World Health Organisation worked out that around 15 million babies per year are born prematurely.

* Naegele's rule - rule for calculating an expected delivery date; subtract three months from the first day of the last menstrual period and add seven days to that date

How many weeks pregnant am I