The first trimester of pregnancy covers weeks 1-13, the first three calendar months of your pregnancy. You may not even be aware that you are pregnant for at least half this time.

The start of your period is a time marker for when ovulation occurs. This is why the first week of pregnancy is counted into your first trimester, even though you are still having your period. Most women ovulate sometime around 14 days from the first day of her last period, although the time varies depending on the length of each woman’s individual cycle.

Gestational age is the age of the pregnancy in weeks since your last period. Throughout this series, we will be referring to your baby’s gestational age, as most information around pregnancy does this as well.

How you may feel

By the end of the first trimester most women have had their pregnancy confirmed. If you haven’t made an appointment to see a midwife or doctor yet, now is the time. Some of the early pregnancy signs are discussed in week 6, but here are general indications:

How you may look

Let’s look at each of the 13 weeks in the first trimester in more detail and see what you can expect:

By the end of each menstrual period, your body prepares to release another egg in around a fortnight’s time. The lining of your womb builds up in readiness to nurture the egg, in case it becomes fertilised and, if this doesn’t happen, the lining will be shed with your next period.

Conception usually happens in the fallopian tube and although it is by any standards a significant moment, there are no outward signs that fertilisation has occurred. Generally, it takes around 6-12 days for the fertilised egg to travel down the fallopian tube to your womb.

Once the fertilised egg (or zygote) has nestled into the wall of your womb, signals will be sent to your body to produce more oestrogen and progesterone. These and other hormones will help sustain your baby throughout your pregnancy. Some women experience a little bleeding as the embryo implants itself into the womb.

The placenta has started to form by now and will play a vital role in producing specific hormones and in feeding your baby. By this stage, the embryo is smaller than a grain of rice, but each of its cells is already programmed to fulfil a specific function. 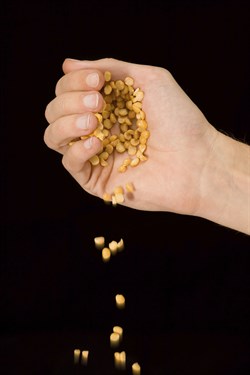 It is now that a heartbeat may be seen on an ultrasound and the eyes and ears of the embryo are being formed. Small buds of tissue, which will eventually become your baby’s limbs, start appearing on each side.

If you suspect you are pregnant, but haven’t already done a pregnancy test, do one now. By the time you are 6 weeks pregnant, the baby can officially be measured. When measuring a baby through ultrasound, it is standard practice to measure from the crown to the bottom. By week 6 the average size is 5-6 mm.

You are now officially just over halfway through your first trimester. Your baby has grown about 10 000 times bigger than it was when you first conceived. So much of your baby’s growth is concentrated on its brain this week, with around 100 new brain cells forming every minute! 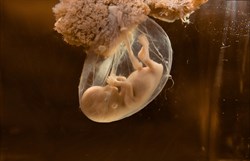 This week your baby is around 1 cm long and can officially be called a foetus. The valves in your baby’s heart are present and the passages, which will help air flow from the throat to the lungs, have formed. Baby’s fingers, toes, lips, eyelids and legs are becoming more clearly defined.

At this time, baby’s mouth and tongue are starting to form. The hands, which until now have been webbed, will start to separate into fingers. On an ultrasound, the foetus can be seen making jerking movements.

The foetal heart is dividing into four chambers and can now be heard with a Doppler ultrasound. All of your baby’s organs have developed. Baby’s brain is large and the digestive system is developing.

By now, the foetus’ genitals have clearly formed, but it is still too early to tell whether you will be having a boy or a girl. Tooth buds are also starting to grow and the eyes are fully developed. Fine hair covers your baby’s tiny body and its facial features are more clearly recognisable.

The foetus now has all of its vital organs and the nervous system pathways have formed. The bones, which have been soft until now, will start to harden. Your baby is less curled up than it was and starts to straighten.

Your baby is as cute as a peach this week and around the same size too. Up until this week, their abdominal organs have been forming outside of their bodies, but will now start moving to where they should be. 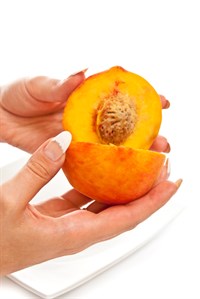